This is something that a good friend of mine & I have been talking about for years!  Years I tell you!  We have had so many discussions with people about this.  So I figured it’s about time for me to share this amazingly accurate (as well as hilariously entertaining) concept to help people understand the problems with: diversity, multiculturalism, and colorblindness.  So if you are reading this article I am going to assume that you have heard of Pokemon, get the general concept of how Pokemon works.  So enough of the nerd love, let me get the overall point.

Diversity/Multiculturalism is a cop out.

Yep.  I said it.  Diversity & multiculturalism is a cop out and an extension of colorblind racism.  Diversity perpetuates the idea that as long as a few of the marginalized populations have something then it proves that their oppression is non-existent.  Diversity/multiculturalism posits the idea that there should be some form of representation of all the racial types, genders, ages, and sexualities so that you end up with a representative variety of identities.  Diversity & multiculturalism programs at many U.S. institutions are about colorblindness, which aims to accomplish equality via sameness, which is a very dangerous and destructive inclusion/assimilation process.  If you want to read more on assimilation, check out a previous blog post I wrote on the topic. American Universities, businesses, & government institutions use diversity quotas, programs, and initiatives for one main purpose: SO NO ONE CAN ACCUSE THEM OF BEING WHITE SUPREMACIST RACISTS/CISHETPATRIARCHS/CLASSIST/ABLEIST etc..

Let’s take a moment to think about a basic concept in Pokemon.  There are many types of Pokemon based on elements and then some are common, others are rare.  The main concept & goal is simple: GOTTA CATCH ‘EM ALL!  Now look at the Pokemon type symbols in the image above.  Just start replacing all of those Pokemon types with marginalized populations: people of African descent, Latinos, First Nations, Asians, women, the poor, disabled peoples, the LGBTQIA*/QUILTBAG community, etc..  American institutions provide opportunities for them to visibly admit & tout marginalized peoples around.  Its a safety net of a sort.  Why?  Well let’s consider this little scenario:

A poor cishet Black woman who is a student at a predominately White institution ends up being a victim of racist and patriarchal micro- and macro-aggressions in class due to a professor’s biases.  The diversity/multiculturalism programs allow the university, department, &/or faculty to save their own ass: I’m not racist, we fund many Black students AKA I’m not racist, I have a Black Pokemon!  Sadly you can literally replace all Pokemon types with oppressed racial groups, sexualities, genders, the poor, & disabled peoples.  Liberalism is literally just playing Pokemon with real people.  & if you get lucky, you can just co-opt intersectionality to your U.S. liberal needs: people within multiple oppressed groups are RARE POKEMON!!!!!!! Use them to dispel accusations of racism, sexism, & classism all at once!!! Its like the EEOC’s wet dream!!!!

So diversity quotas end up being mostly Pokemon rosters.  If you have one of each type then you can survive pretty much any & every gym battle (lawsuit, diversity complaint, etc.).

Or let’s take a simple yet recent example into consideration:

In her defense of her love & fandom for the racist Eve Ensler, Rosie O’Donnell tweeted this in response to PoC critiquing her on twitter:

Not actually addressing the problem of Ensler’s work, Rosie jumps right to a photo of herself with her complete line of Black children Pokemon to prove how not racist she is.  Because you know, standing next to Black people is the TRUE tool to dismantling white supremacist racism…

All the while defending herself by doing this to a Black person who critiqued her use of Black children as stage props to prove her “anti-racism”:

The reality is, people, institutions, & systems within this society use these tropes ALL THE TIME. This is actually one of the main complaints that critical race theorists have made about liberalism:

“Ignoring the problem of intersectionality, as liberalism often does, risks doing things by half-measures and leaving major sectors of the population dissatisfied. Classical liberalism also has been criticized as overly caught up in the search for universals, such as admissions standards for universities or sentencing guidelines that are the same for all.  The crits point out that this approach is apt to do injustice to individuals whose experience and situation differ from the norm.” – Delgado & Stefancic in “Critical Race Theory: An Introduction” pp. 57-8 (2001)

Thus liberalism is your typical diversity initiative, multiculturalism, saying the solution is to just “integrate” everybody or my all time favorites “We’re ALL the same!” or “There’s ONLY ONE HUMAN RACE!”  The reality is, we aren’t all the same, nor do we want to be.  Integration hasn’t worked well at all for people of African descent in the U.S. but it has managed to line the pockets of the U.S. economy. 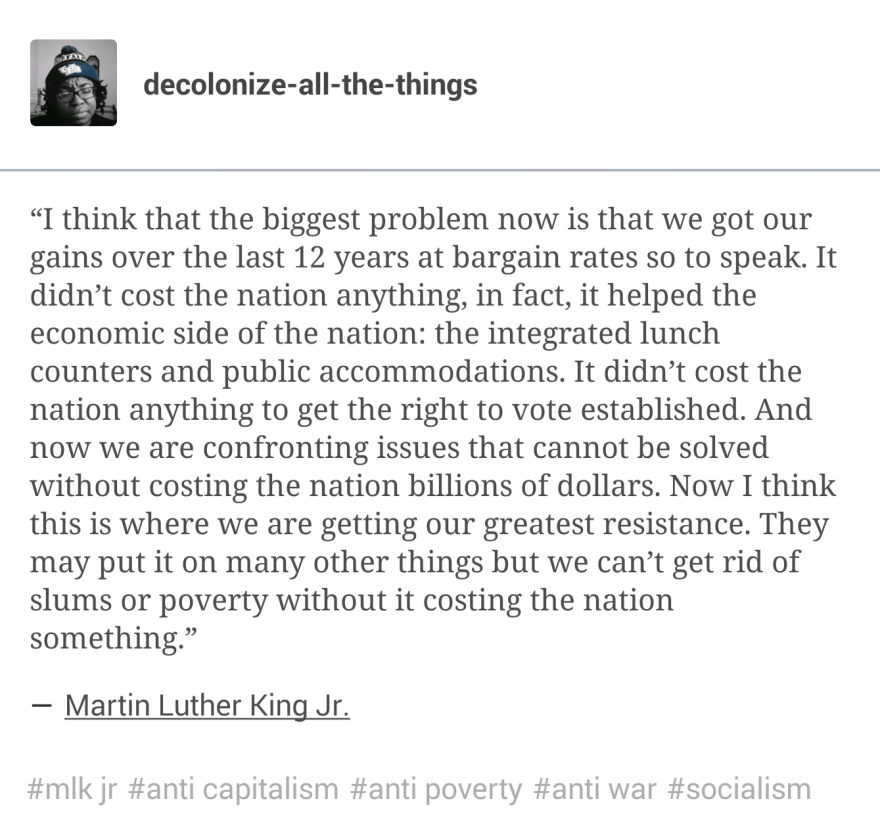 The reality is we aren’t all the same. There is nothing wrong with difference. In the words of Audre Lorde, “Without community, there is no liberation…but community must not mean a shedding of our differences, nor the pathetic pretense that these differences do not exist.”  Diversity & multiculturalism are NOT about the celebration of difference.  They are about privileged liberals employing the lives & bodies of disempowered peoples for the purposes of deflecting away from the systemic & institutional issues at hand.  Rosie could have addressed the fact that Ensler’s Vagina Monologues while appearing great on the surface is racist & needs an update but instead she clung tight to Ensler & her racism & then told everybody she has a whole squad of Black Pokemon so its not possible for her to be racist.

We’ve all heard & seen privileged populations do it:

You see the pattern here?

The reality is, liberalism in the U.S. allows people to get away with being oppressive while also using people as identity props for them.  & quite honestly, they’re still being white supremacist racists, cishetpatriarchs, homophobes, classist, &/or ablesist, etc.. WHY?

BECAUSE HAVING A MARGINALIZED PERSON WITHIN PROXIMITY TO YOU IS NOT TRANSFORMATIVE JUSTICE, ITS NOT EQUITY, & IT DEFINITELY ISN’T DEMOCRATIC.

1 thought on “Gotta Catch ‘Em ALL!: How Liberalism Turns Oppressed Peoples into Pokemon” Leave a comment ›

My Tweets
Follow Decolonize ALL The Things on WordPress.com