During my journey of Black feminist self-actualization I have come to notice almost everything that happens around me & analyze almost every interaction I experience & witness.  There have always been times in my life where I dealt with an issue with someone & I knew that I was being treated wrongly or something just wasn’t right, I may not have been able to put a technical name or term on it but something was definitely up.  Interestingly enough I have been analyzing a number of instances where a male friend who claims he is a Black feminist asserted his male privilege and displayed his status as a “Benevolent Patriarch”.  In “We Real Cool: Black Men & Masculinity” bell hooks defines benevolent patriarchs as men who, exercise their power without using force.  These men are nice but still none the less, patriarchally oppressive.

bell hooks also mentions benevolent patriarchy in her book “Communion: The Female Search For Love”.  One of the most interesting things that hooks mentions about benevolent patriarchy is that these are the type of men who are fine with women getting equal pay, working outside of the home, and love feminism when it means free pussy.  BUT benevolent patriarchs engage in dominant-subordinate interactions with their significant others &/or loved ones in the private sphere.  This also includes men who decide to take the dominant role in those interactions or the submissive role.  Either way perpetuating the idea that someone must be subordinate to another is a strong embrace on the basic ideals of patriarchal interaction.

So back to the incident that I was discussing, you see the friend I had was a benevolent patriarch, he did it subtly & not all the time but it showed in a number of comments he made here & there. For instance, while he is a man & I am a woman, we were very close friends.  I had no attraction him whatsoever, I saw him as a brother.  But problems arose when his new significant other found that somehow his abundance of female friendships was a call for concern.  This notion was consistently noted & mentioned, and slowly but surely he began to change his behaviors & interactions with me & even his perceptions of our “friendship” began to change.  Assuming that friendships between the opposite sex are simply instances of attraction waiting to happen is patriarchal.  It reduces men & women to animal instinct incapable of agency & choosing a partner to share intimacy with.  This awkward situation forced me to consistently have to state that I was in NO way attracted to him just to try to appease his new significant other; especially since I wanted everything to work out between the two of them.  But over time, slowly but surely our friendship became a means of concern for his significant other who was concerned about our friendship somehow getting in the way of him completely sharing intimacy with her.  Not only was this not true & there was something going on that had nothing to do with me, he allowed her to believe that fallacy & then called me as if I could do something to help appease her & make her feel like I was no threat.  Both of them were very kind about their patriarchy & how they decided to define me by basic animalistic sexual drives & instinct to assume that somehow our friendship blocked their intimacy when what she should have been concerned about what was right before her own eyes.

The turn of the tide came for me when he denoted our friendship by comparing it to marriage.  His patriarchal analysis was offensive, painful, inaccurate, nauseating, & patriarchal as it gets.  This comment denoted that he was somehow under the impression that our friendship was outside of the paradigms of nature since it was “uncommon” in the general society.  When truth be told, when you have a good friendship, you shouldn’t legitimize it or make a point about it by comparing it to the haphazardly damaged and loveless society we live in now.  When I voiced my disgust for his comment & how much I disagreed with it, he made it clear that he believed he should be allowed to express himself.  I allowed him to.  His excuse was just as patriarchal as his original statement.  Now you see, I made a mistake here.  I allowed him to express his own opinion or feelings about a patriarchally sexist comment he made to me.  Yes.  That was a mistake.  If he really is a Black feminist and a man who is an ally to women, he should have known his feelings just don’t matter after making a hurtful sexist statement. 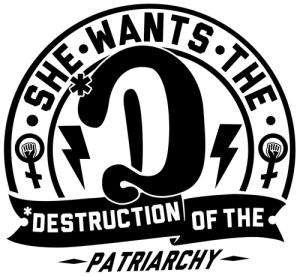 You see, benevolent patriarchs are nice men, who make the mistake of not confronting patriarchy in their own lives (whether private or public) and manage to find some way to be nice about their patriarchal domination.  They make the mistake of assuming they are somehow revolutionary good men supporting the fight against patriarchy, when all they are doing is adapting their patriarchy to the most recent feminist updates to avoid actually challenging the patriarchy in their personal lives whether it be in romantic relationships or friendships.  Beware of the benevolent patriarch because while he may wine about how hard he is trying to change, he isn’t challenging the patriarchy in his own life.  Avoiding the confrontation of patriarchy in your own life is extremely problematic, it leads to damaged relationships along the trail of life.  So if you are a man, claiming to support women in the fight against patriarchy; keep your male privilege & patriarchy in check because if you don’t you’re just a guy who happens to be a bit nicer about oppression.

My Tweets
Follow Decolonize ALL The Things on WordPress.com